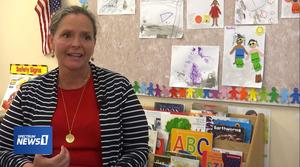 Each day, thousands of kids, birth to four years old, attend Head Start programs throughout Ohio to prepare for kindergarten.

- In Warren County, the number of kids in foster care coming to early Head Start has doubled since 2015

- Currently, homeless children make up 13 percent of the entire enrollment

Lisa Cayard heads up the program in Warren County.

"Head Start has always served the most vulnerable children, the ones with the greatest needs in the community,” said Cayard. “And primarily, that's based on their family income. We serve children that are at or below 100 percent of poverty."

They also serve children who are homeless or in foster care and now they're seeing more than ever before.

"Every time I see the news and something bad happens to a child or there's been an overdose, I think of that family because they're many of the families we're serving,” said Prescott. “And you know the ripple effect that is gonna happen in that family and for that child."

To put things into perspective, Head Start is serving over 1,500 kids who are in foster care and nearly 2,000 kids who are homeless across the state.

In Warren County, the number of kids in foster care coming to early Head Start has doubled since 2015.

And now homeless children make up 13 percent of the entire enrollment.

Cayard says the big jump is a result of compounding issues like poverty, family violence, and parental incarceration.

"The biggest thing that we're seeing now is children that are in situations where they're not safe because of the parents’ substance abuse,” said Cayard. “So, they're being taken away from their families, from their homes and being placed in foster care or kinship care."

Ruth Rowlett got custody of her nephew Malakhi after he'd been in multiple foster care homes.

"While his mom was pregnant, she was beaten. So that created in vitro trauma. The father did extensive drugs,” said Rowlett. "So, the first early weeks... she was doing drugs also."

Rowlett says she thought she could love him through the trauma, but quickly saw it wasn't going to be that easy, especially after placing him in one day care after another.

"He was not good at just sitting by himself...looking at a book or anything else,” said Rowlett. “Once he went to day care, he would do well for a couple weeks and then if the situation became stressful, he was hitting the students. He was hitting the teachers. He was running out of the classroom."

But when she brought him to Head Start, things changed.

"The teachers were prepared to deal with him...and he became happy all of the sudden and life changed in our home," said Rowlett. "And it's been dramatic. I can't express what it's done. There was a lot of tears, a lot of hard nights. His self-esteem was down and now he's boosted back up."

Cayard says they train their teachers how to handle the developmental and social-emotional problems children often bring with them.

She says in order for teachers to help kids get ready for kindergarten, they have to address the behavior first.

"They are so dysregulated because of what they've experienced at home, that they come in and they're running around the room and throwing the furniture around. And they cannot concentrate. They cannot focus to learn," said Cayard.

"It's seeing through the behavior to what is causing it...to see the heart of the child and how that child has been hurt and injured and how we can help them to heal, Cayard added. “So, the teachers are becoming healers as well as teachers."

For four-year-old Malakhi, Rowlett says it's been a lifesaver.

Cayard and Prescott say having trained teachers hasn't just made a world of difference in the lives of the kids, but in the teachers too.

“Across the board, they're saying that that has really allowed them to stay sane and be able to be effective in the classroom,” said Prescott.

And having balance on both ends is key as Prescott and Cayard are certain the number of homeless children and those in foster care will continue to rise.