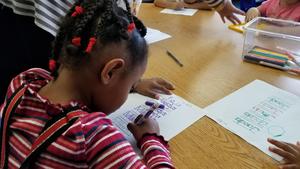 New data from a United Way of Greater Cincinnati Success By 6® partner bolsters the case that early childhood education is crucial in preparing children for kindergarten, thereby setting them up for success in school and beyond.

KRA assesses four areas of early learning: social foundations; mathematics; language and literacy; and physical well-being. In each of those areas, the children in BCESC Head Start programs—based in 14 school districts in Butler and Preble counties—outperformed children in the state as a whole.

"This is really good news," said Suzanne Prescott, BCESC 's early childhood program director. "(But) we're not settling for this. Moving forward, what it means is we still have more work to do because we're still not where we need to be."

It's particularly noteworthy, Prescott said, that more than 90 percent of the children in the BCESC Head Start programs come from families at 100% of the federal poverty level. What's more, English is not the primary language for 30% of the children. The data shows that being enrolled in Head Start helped close the achievement gap for such children.

Sometimes, preschool programs that work with kids in poverty set the achievement bar too low, Prescott said. "We need to pay attention to that and make sure we are bringing all kids up."

BCESC is a longtime Success By 6® partner. United Way convenes such partners—which include schools, child care centers and local agencies—to support the idea that early childhood education paves the way for long-term school success," said Marcie Langendorfer, who leads Success By 6® efforts in UWGC 's Middletown and Eastern areas. Indeed, kindergarten readiness has been linked to higher earning potential, better health outcomes and the ability to escape generational poverty, all of which align with United Way's mission to help families build economic well-being.

"We know if kids start (kindergarten) behind, it 's really hard to catch them up," Prescott said. "It can be done, but it 's really hard" and requires large financial commitments from schools.

Prescott says the data suggests similar good outcomes can be expected from other high-quality preschool programs. "As we have been pushed harder and harder to have better curriculum, to have better data, and to use our data to make adjustments, it really helps programs to get to a higher level of quality."