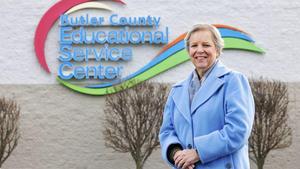 Finding enough substitute teachers to fill in at classrooms was hard to do during the best of times, say state and local school officials. And now, finding substitute instructors to fill in for absent, full-time teachers during an ongoing global pandemic is even further from the best of times.
Recent years have seen school districts in Butler and Warren counties — and across Ohio and the nation — scramble to hire more substitute teachers as schools were buffeted by waves of coronavirus illnesses — and even more disruptive quarantine procedures that saw full-time teachers barred from schools for days and weeks.
State changes earlier this year in quarantining teachers has substantially reduced teacher absences, but the problem of finding enough substitute teachers remains but has begun to improve slightly, said school officials.

Anna Hennig, a human resource specialist for the BCESC and a 16-year veteran of finding substitutes for local schools, agreed but added “last year was even worse.”

“This year is still bad,” Hennig said, noting in pre-pandemic times BCESC supplied about 1,200 subs a school year but that number is now down to just over 700.

It’s not a problem limited to Butler County.

The number of substitute teacher applicants approved for temporary work in Ohio schools has dropped 35% between 2017 to October this year, according to the Ohio Department of Education.

But the onset of the coronavirus in March 2020, has frightened away some of the older, long-time substitutes and retired teachers, said school officials, because as a demographic group their age put them at greater risk for severe illness from Covid.

Given the often pandemic-caused academic lags suffered by many students the last two school year, having an ample pool of substitutes to slot into temporary classroom vacancies is all the more crucial, said Scott DiMauro, president of the Ohio Education Association.

“Covid has made it harder (and) this is the worse I’ve ever seen,” said DiMauro, a 31-year veteran of Ohio public schools.

OEA representatives from around the state have told DiMauro the sub shortages in their local schools are “serious to severe.”

“And that’s despite the fact the (Ohio) legislature has passed bills the last two years to change the standards to make it easier to hire people on a temporary basis, even without a college degree,” he said.

“I like to stay active and though I can make more money working at White Castle (restaurants), being a substitute teacher isn’t about the money for me,” said Kramer this week after a day at Fairfield High School.

“The day was a combination of teaching in an English class and then history and then the last period was my favorite subject, chemistry,” he said.

When friends ask Kramer why he chooses that part-time work at a time when so many other non-school job options are available, he tells them: “It’s an opportunity for you to give back some of what you received when you went through school.”

“The schools are in dire need of substitutes,” and he added, the work often is not taxing and usually involves following lesson plans already made out by the full-time teacher who is absent.

“You don’t often have to be knowledgeable in different subjects. You are kind of hybrid teacher and when you are a sub, most of the learning occurs with the student interacting with their (classroom) computer,” said Kramer.

Jennifer Puthoff is a 50-year-old substitute but chooses to work at only one school.

Many local school buildings sign up their own pool of subs to fill full-time instructor absences in their school.

For the last seven years, Puthoff has chosen to work only at Middletown’s Rosa Parks Elementary but prior to that bounced around other area school districts including Edgewood, Madison and Springboro schools for sub work.

Fill-in teachers can pick districts, buildings and academic subjects and may also have flexibility in picking the grades taught and the days worked and the flexibility is a big appeal for the job, she said.

For more information about being a substitute teacher go to the BCESC website or Warren County Educational Services Center’s website for schools in that county.